The SDL/IREC team here in SPEX are working on an entry into this years SDL payload challenge at the Spaceport America Cup 2019. The project, dubbed SPEXTRO (Spectroscopy Protein EXperiment Through Reaction Observation) aims to create a microfluidic spectroscopy platform contained within a 3U (10x10x30cm) CubeSat frame. The experiment in particular is aimed at studying the effects of freefall on proteins using microfluidic spectroscopy. That is, the branch of science concerned with the investigation and measurement of spectra produced when matter interacts with or emits electromagnetic radiation. During the competition, the experiment will be launched to a target altitude of 10,000 feet on a sounding rocket developed independently from RIT Space Exploration.

The SDL payload competition is held by Space Dynamic Laboratories in Las Cruces, New Mexico at the Spaceport America Cup alongside the Intercollegiate Rocket Engineering Competition (IREC). The SDL payload challenge pits universities from across the world against each other. It is judged on the following criteria:

SPEX coming into the competition this year has the ability to leverage what was learned after competing in the SDL payload challenge last year. During the competition last year, SPEX launched a payload named Hyperion in collaboration with another organization on campus which supplied the launch vehicle. Hyperion, also a 3U CubeSat form factor aimed to fit the role as a “black box” or launch qualification platform for sounding rockets. During the launch, Hyperion reached an altitude of 9,990 feet, and successfully accomplished almost all of the goals for the project except final ground recovery. 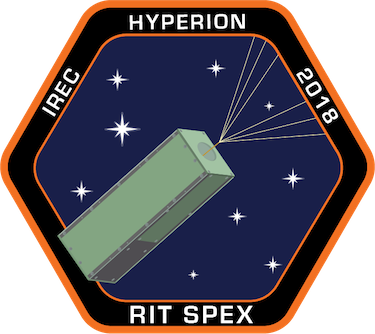 The experiment for this year’s project is a spinoff of a Multidisciplinary Senior Design (MSD) project designed and developed by now alumni members of SPEX. SPEXTRO aims to build on what was accomplished by the MSD team during the 2015/2016 academic year. This year’s project aims to operate in freefall where the MSD project was conceptualized as operating in low earth orbit. Although the environments are and conditions are different, a “microgravity” can still be achieved in freefall.

During the flight, lyophilized (freeze dried) proteins will activate in a solution contained within a microfluidic chamber. Once activated, the proteins will be in freefall and should start showing signs of folding. During this time, spectroscopy will be performed on the microfluidic chamber containing the now activated proteins. Data from the photovoltaic sensors (used for spectroscopy) will be logged and transmitted to the command and control systems for safekeeping.

The protein to be used will contain the amino acid Tryptophan. Tryptophan is one of the few amino acids which fluoresces under certain wavelengths of electromagnetic radiation, thus being crucial in determining whether the protein has folded or not. The folding of these proteins will have a direct effect on the structure of the protean which would change how much Tryptophan is exposed to the electromagnetic radiation, thus driving readings from the photovoltaic sensors. 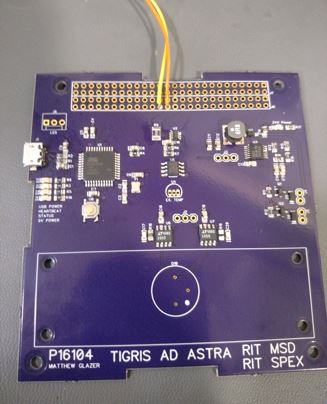 The MSD board (with a familiar name!)

Sometime before the experiment has been performed in freefall, a control experiment will be conducted on the ground under the same environmental conditions. This control will help to eliminate any noise or additional effects on the proteins not due to microgravity.

The team this year aims to not gain or contribute any knowledge not understood by the scientific community, but to prove such an experiment can be done within a CubeSat as a technology demonstration. Experiments like the one in SPEXTRO have been done by scientific organizations across the globe. Given results from previous experiments done on proteins in microgravity, the project team has an opportunity to further validate or disqualify results from SPEXTRO.