So What is a High Altitude Balloon?

A high altitude balloon, or HAB, is a very large latex balloon that depending on the size of the balloon and how much helium will take a small payload to around 100,000 feet or 30,000 meters in the atmosphere. Above that the pressure difference between the atmosphere and the balloon becomes too great and the balloon pops. When filled, the balloon is around a meter in diameter and the payloads we usually send are under six pounds. The flight time is usually a couple of hours and consists of preparation, launching, tracking, and recovering the payload. The relative low cost and fast turn around of HABs provides a great way for SPEX members to gain hands-on experience in a field they are interested in. Examples of this are design flight software, flight hardware, payload bus, and other payload concepts.

SPEX has launched 4 balloons missions in the past, appropriately named HAB 1, HAB 2, HAB 3, and HAB 4. The first balloon was launched in the fall of 2015 and proved to be an extremely valuable learning experience. The balloon was under-filled and rose too slowly in the atmosphere. Unfortunately, it got caught up in the jet-stream and flew all the way to Maine before we lost track of it above a lake. Fortunately a couple months later, SPEX got a call from a family who found the payload. The box had been marked with contact information and who to call in the event it was found.

For the follow-up mission, SPEX took what we had learned and redesigned the payload box and control boards based on the experience we had with HAB 1. To build on HAB 1, HAB 2 was the first SPEX high altitude balloon with a scientific payload. The main payload of the HAB was testing a Senior Design Project for Anthony Hennig. The basis of the project was a deployment system of spring hinged solar panels on a CubeSat. HAB 2 was launched on May 8th, 2016 and recovered as planned.

Still shot of HAB 2 above Rochester, NY.
Full video from HAB 2 until camera failure at an estimated 18,500m.

On December 3rd, 2017, RIT SPEX launched our third balloon, HAB 3. Unlike previous launches, there was no third-party payload on-board. The main objectives were to test telemetry gathering done by in-house designed software and hardware and to record pressure/temperature data both inside the balloon and inside the bus box. This HAB launch was also used to test a new boom-mount for the GoPro Hero 3 camera that would record the flight. A 3rd Party APRS module transmits GPS and telemetry data such as battery voltage and temperature on-board.

Launch conditions were mild winds, borderline freezing temperatures, and a mixture of snow and rain. Like the previous two HAB launches, HAB 3 was prepared and released in a parking lot in front of RITs campus. After launching, using the on-board APRS transmitter, we tracked our balloon on aprs.fi. The balloon took off east, hitting approximately 155 mph for a maximum velocity. At about 65,000ft of altitude, about 10 miles North of Ithaca over lake Cayuga, the last GPS transmission was received. The location of the HAB was unknown after this. 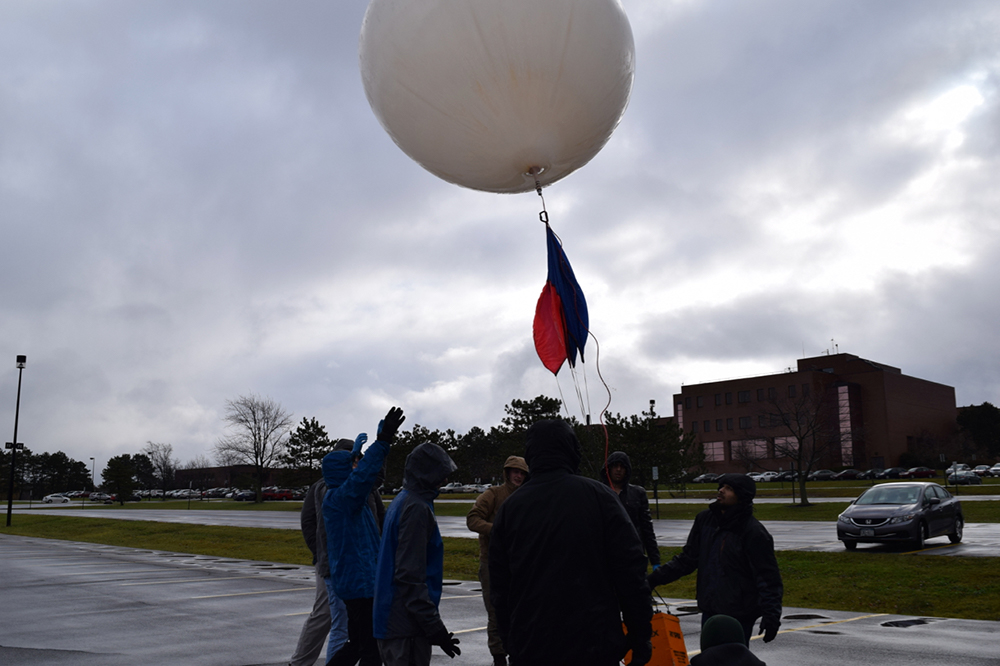 Using predict.habhub.org, with data from our previous HAB 2 launch, the team expected the payload box to land in the general Cortland, NY area. Three days later a farmer in Marathon, NY called the number written on the side of the payload. The HAB had landed in a cow pasture fortunately where it would be found and played with by a group of cows.

On April 22nd, 2018, SPEX launched our fourth balloon, HAB 4. Like other balloons, HAB 4 was launched from RIT. That time, there was be 3 scientific payloads.

There were three scientific payload on HAB 4, they are horizon detection, vegetation mapping and a relaunch of the deployable CubeSat solar panels from HAB 2. 2 computer vision and one tech demonstration. This is all along side the data collection from the vast array of sensors on-board.

Together they create a multi-mission experiment for the High Altitude balloon team. The horizon detection payload uses two cameras mounted in stereo connected to a raspberry pi to come up with a line of best fit for the horizon and can then calculate the angle and direction of the payload box as a result. This relies on computer vision and some advanced computer science skills to write. This information is very helpful for other payload and also helps us learn more about how the HAB moves throughout the atmosphere.

The vegetation mapping payload also used two cameras, this time mounted downward. One of these cameras has had its infrared filter removed to extend the wavelength we can collect. This allows us to collect more data. It works by taking that data and transform the color-space to perform calculations on it. This way we can create a detailed vegetation map of an area.

What about the future?

SPEX members and other seniors in the RIT Kate Gleason College of Engineering have been working on another High Altitude Ballon project. These seniors are creating the High Altitude Balloon Instrumentation Platform (HABIP). It is an even more complex HAB than what SPEX is currently flying. HABIP has an array of cameras and communication technologies that allow streaming of flight video. The platform also includes a reaction wheel that will stabilize the instruments in the high-wind flight environment.

SPEX is always working on the next generation of HAB buses and payloads. SPEX will continue to launch more balloons and send more projects to space. SPEX is also building a next-generation HAB platform, microHAB. This HAB will be modular and will be built based on everything we have learned.

Why does HAB matter?

The HAB team is our response for the need to test experiments, validate technology, and explore the "near-space" environment. High altitude balloons have recently been a focus in the scientific community as a low cost method of launching equipment into near space. SPEX developed a low cost High Altitude Balloon (HAB) program that enables a standardized system to test research experiments in a near-space environment. There are a variety of space applications for high altitude balloons and the payload changes with each launch. Out HAB team works with the greater Rochester scientific community to make these mission both possible and successful. 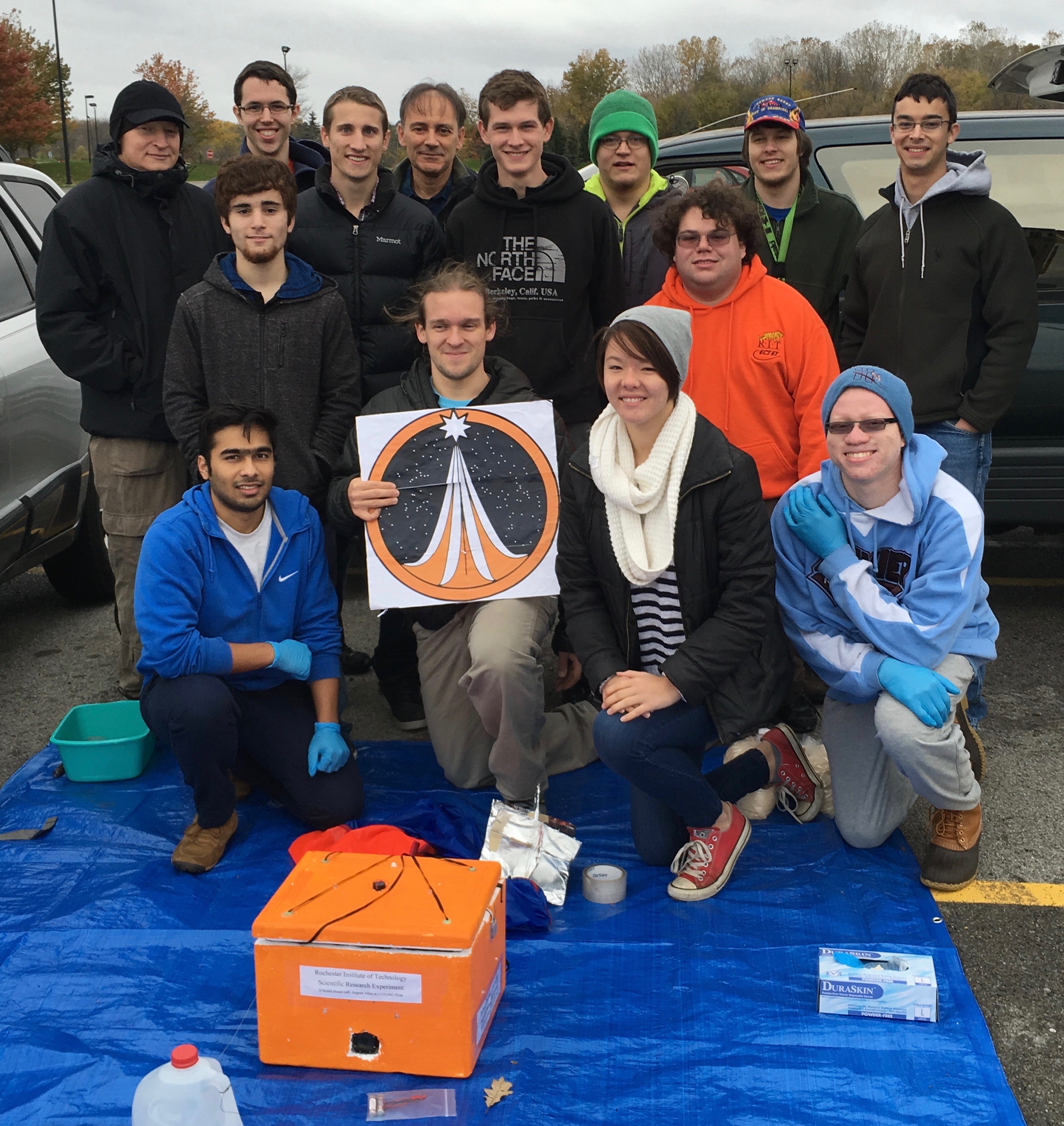 The HAB 1 team on the day of launch.
HAB Projects SPEX

Where U At Plants (WUAP) Technical Report